Ocean clean-up underway on the shores of Kerala, India.
© Friends of Marine Life.
Download
Download this Chapter in English (pdf)

For the German version of this interview, see here.

The Indian state of Kerala has 590 km of coastline and is among the most biodiverse places in the world. For centuries, people of Kerala have lived of the ocean and its rich fishing grounds. Similarly to many other places worldwide, increasing industrialization and global marine pollution are threatening the ocean and the coast. Consequently, not only the marine environment but also the cultural identity and means of existence of many coastal communities is endangered. In order to prevail the region’s uniqueness and people’s livelihoods, local activists and organizations are working to strengthen the political and public awareness of the ocean and its meaning for the lives of people. The inclusion of coastal communities and fisheries is and integral element in marine protection as shown in the work of Friends of Marine Life.

Why did you get involved in marine protection?

My father and elder brothers are traditional fishermen. In my youth, they went to fish in the sea facing my village, looking for rocky reefs, and brought back a lot of fish. I noticed that most local fishers caught pelagic fish in their daytime forays; but experienced fishers like my father worked at any time, day or night, depending on the season, and caught many different kinds of fish. They told me about the places they went to fish, the seabed there, and nuances of fish behaviour.

After my school days I worked in an NGO engaged in research, training and organisation in the fishing sector. I could work closely with many fisheries scientists and watch how they worked. The turning point came when I could compare traditional and scientific knowledge.

Artisanal fishers have a deep traditional knowledge about the seabed. I later documented bits of their knowledge and started focusing on conservation activities. They know the sea, they caress its delicate marine environment, negotiating their way over the rocky reefs, protecting these features.

Can you explain what Friends of Marine Life is and does?

Friends of Marine Life (FML) is an indigenous coastal community voluntary organisation that aims to safeguard the marine biodiversity and coastal ecosystems services in South India. For some years, FML has been undertaking seabed ecosystem studies with a team led by experienced citizen scientists, marine biologists, scuba divers and coastal youth together with the support of indigenous fishermen.

The main purpose of the organisation is to safeguard the marine biodiversity and coastal ecosystems services in South India. FML is also engaged in documenting and sustaining the traditional and local knowledge of the coastal communities in India especially in Kerala and Tamil Nadu. Under seabed studies, we have so far covered the Gulf of Mannar, Kanyakumari district in Tamil Nadu, Trivandrum and Quilon districts in Kerala, around 2,000 square kilometres of near inshore and up to 43 meters depth of the sea area. As part of the Ocean literacy programs, we conduct photo and video exhibitions in schools, colleges and other academic institutions and also, we publish our findings through media as a part of dissemination of our activities. Most recently, in a response to UN Sustainable Development Goal 14, FML undertakes some activities in

South India which includes marine debris clean-up and ghost net removal drives, capacity building of the fishing community through SCUBA diving training.
FML has an interdisciplinary, inclusive and collaborative working group to oversee the objectives of the voluntary commitments. This group initiates, recommends and reviews the organisation’s action plans and progress. It consults partner organisations, indigenous community members, government officials and other stakeholders to make appropriate decisions. FML governing body supervises the decisions, actions and responsibilities undertaken by the working group. It ensures collaborative and participatory decision-making and accountability.

What does it make different to other Marine Protection projects?

FML uses scuba diving to study the marine environment, document it, and initiate knowledge-based action for conservation. Recent FML activities such as marine debris clean-up and ghost net removal were aimed at generating public awareness about marine conservation, and rampant plastic pollution – serious issues that warrant an urgent response. In contrast, much of the ocean research in India is laboratory-based. Even the rare field studies of corals and seaweeds are often limited to the shallow waters under 15 metres depth. The scientists seldom study the livelihoods of artisanal fishers.

All FML studies on the marine environment are indigenous and local knowledge-based. It is the artisanal fishers who encouraged us to learn more about the seabed. Our experience shows that the knowledge, experience and presence of the local fishing community are very important in conserving the marine environment. In this context, FML provides scuba diving training for members of the coastal community. Free divers, students of fisheries sciences, and citizen scientists are part of this initiative.
Today there is no representation of the fishing community in the Coast Guard, Coastal Police or marine enforcement agencies. Our capacity-building programmes aim at securing jobs for local youth in such agencies. FML could include trained scuba divers in marine conservation activities such as marine debris clean-up and ghost net removal, and in seabed studies.

What makes the aspect of doing marine ecosystem studies using oral history so relevant? What are the stories being told?

FML’s experience shows that members of the artisanal fishing community have better knowledge and experience in certain parts of the marine environment, such as the seabed. We need to document this knowledge. FML takes this need into account in our oral history initiatives. For instance, the seabed lying adjacent to the district of Thiruvananthapuram in Kerala state of south India has 100 rocky reefs that are potential fishing zones. The fishers know this environment very well. FML personnel document this knowledge, visit the field sites, and confirm the presence of the reefs using traditional methods. We can prove that the knowledge of the artisanal fishers in this field is unique.

Does it match your academic findings? What is the status of the ecosystems in your region? And is there a chance to better their conditions through FML’s activities?

I am a citizen scientist. Therefore it is the job of the scientific community to compare our knowledge with that of academic findings. Unfortunately scientists in India are rather dismissive of citizen science. The total lack of knowledge on the local marine environment in our curricula highlights this negative attitude. It is FML that first brought out underwater visuals of areas that support fishers’ livelihoods. People are just about getting to know about the environmental problems that affect these livelihoods.
Our ocean literacy programmes are expected to bring about a change for the better. In our area, two years of dredging for a harbour has destroyed about 30 rocky reefs. An ecological impact assessment that preceded these activities did not include information about these reefs. Had these studies used traditional and local knowledge this would not have happened. FML now concentrates on the capacity building of the coastal community and maximum documentation of the seabed features. Besides, we promote ocean literacy. These two activities will contribute to better conserve the local seabed.

How are your activities received by politicians and government? Do you see a lack in regulation or political awareness of this issue? Do you already see any changes in society and politics? Or are they on the contrary trying to back your activities?

When we presented our findings to the local governance bodies we realised that it is for the first time that they were becoming aware of the features and problems facing their own coastal waters. Because of this lack of knowledge, there has been no effective legislation on conservation of the marine environment. Politicians and policymakers do not know much about the marine ecology, so they sometimes get confused while making decisions that affect the coastal and marine environment. In this context, FML needs to play a very important role in creating awareness. It is, however, a positive sign to see some officials are committed to the cause of environmental protection, and they take marine conservation seriously.

What is the next step? And what would be the biggest obstacles to your work? And where do you see limits?

We aim to continue our actives more vigorously. Scientists, policymakers, and politicians have not included marine conservation into the development agenda of India. We do not expect a top-down approach to include the knowledge, experience, and talents in development projects. Organisations such as FML play the important role of learning about the marine environment and conserving it. Through indigenous and local knowledge systems link knowledge with action in conservation. Voluntary groups engaged in this field do not receive adequate encouragement or support. That is the biggest obstacle that FML has been facing.

Things are changing. I could represent FML in the 2017 UN Ocean Conference and give a presentation about our work with support from the German NGO Bread For the World. We hope to get more such opportunities. 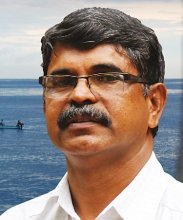 Marie-Luise Abshagen is Policy Officer on Sustainable Development at the German NGO Forum on Environment and Developement.